Showing posts from August, 2018
Show All

Barbie and the Three Musketeers 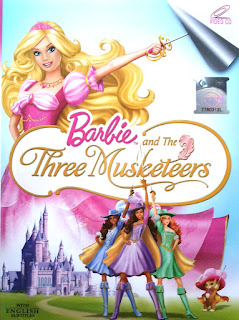 Type: Animated movie Barbie stars as Corinne, a 17-year old French girl from Gascony, who travels all the way to Paris to pursue her dream of becoming a musketeer who protects the Prince. Apparently it had been agreed with her mother that she can choose to be a musketeer when she turns 17. Corinne is the daughter of the late D’Artagnon, who was a most respected musketeer during his days. Her mother asks her to meet Monsieur Treville when she arrives in Paris; Monsieur Treville was a good friend of D’Artagnon and he currently serves the royal family as the leader of the musketeers. And so, riding on her father’s horse Alexander, and bringing along her cat sidekick Miette, Corinne journeys to Paris. As soon as she arrives in Paris, reality sets in: nobody trusts a woman to be a musketeer, not even Monsieur Treville. Corinne became a laughingstock among the other musketeers and the people in the city. Monsieur Treville, being a nice man, advises her that being a musketeer do
Post a Comment
Read more